It’s a commonly held belief that changing the exhaust system on an AW11 makes no difference in power.  People have been repeating this for so long that they seem to believe it almost universally.  However, this article will show that an AW11 does indeed respond to basic intake and exhaust tuning, and that the right changes really can improve power.

Back in 2007, a friend and I spent an afternoon experimenting with exhaust systems on his ’85 MR2.  Ben’s car was purchased without a muffler, and he’d built a pretty basic glasspack system that came straight back from the manifold right to the rear of the car.  It was brutally loud, and he’d just purchased a new OEM Toyota Supercharger-spec muffler (now discontinued) in hopes of making the car more livable.  His car was otherwise bone stock, using a stock cast iron exhaust manifold and a stock induction system including the original airbox.

Our goal was to test the car in several different configurations and see what worked best.  After we got everything built, we used StreetDyno for objective back-to-back testing, making three runs in each configuration and comparing the most representative “average” result with each setup against the other configurations.  This gave us a good indication of how each system performed relative to each other.  What we learned surprised us both.

We started with this stock-style muffler and catalytic converter.  The OEM Toyota muffler we had was too rusty to be useful, so this Midas muffler was used instead.  Because an OEM muffler may have been a better performer, we’ll consider this a worst-case example. 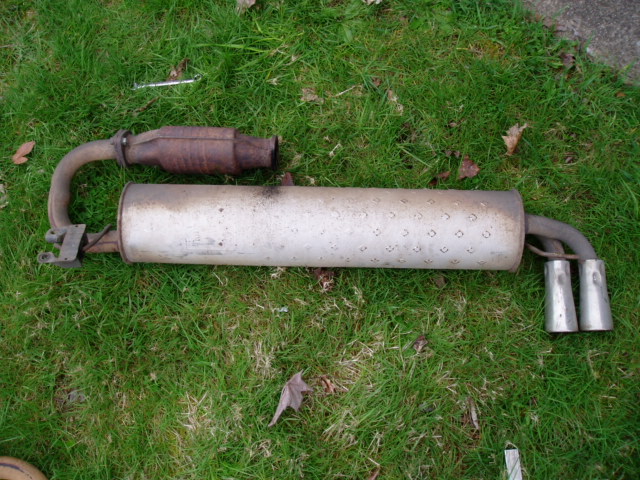 Here is the OEM catalytic converter we used with the Midas muffler.  Again, not the best condition, so we’ll call it a worst-case example.  That said, it and the muffler are probably representative of what a lot of MR2s are actually using: 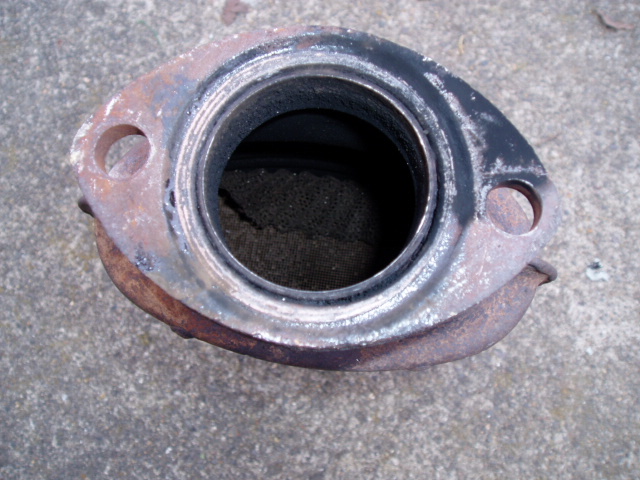 With the stock (worn-out) cat, the stock-style Midas muffler, and full intake system in place, here’s the StreetDyno plot showing estimated power and torque at the crankshaft. 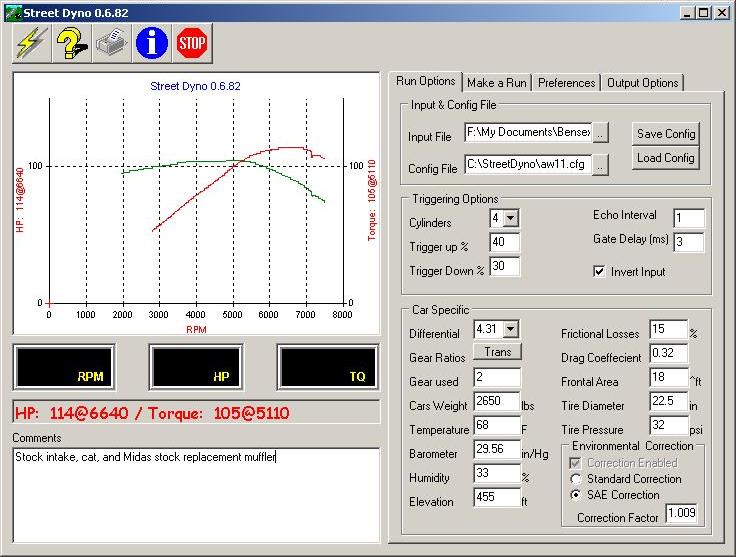 Again, this is not meant to be compared against other dyno plots, but is useful for comparison against the other systems on the same car.  Here are the figures we observed:

Next we tested the SC muffler.  This muffler has a larger flange than the NA system, so I built a 2.25″ test pipe that replaced the catalytic converter: 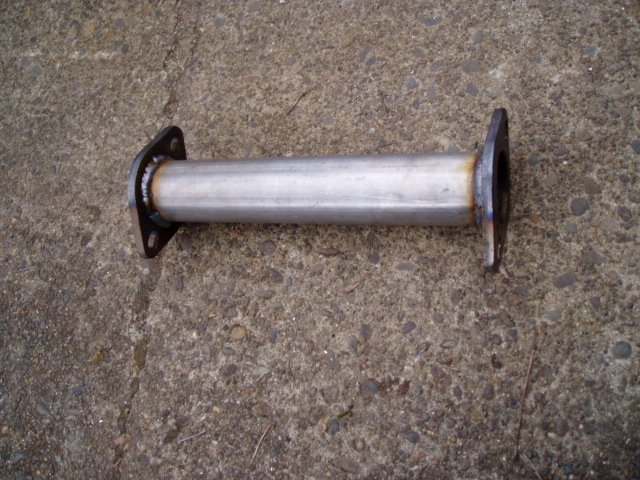 The stock SC muffler is designed to stick into the outlet of the catalytic converter.  We had to trim the excess tubing the get the muffler to mate up to the flat flange on the test pipe: 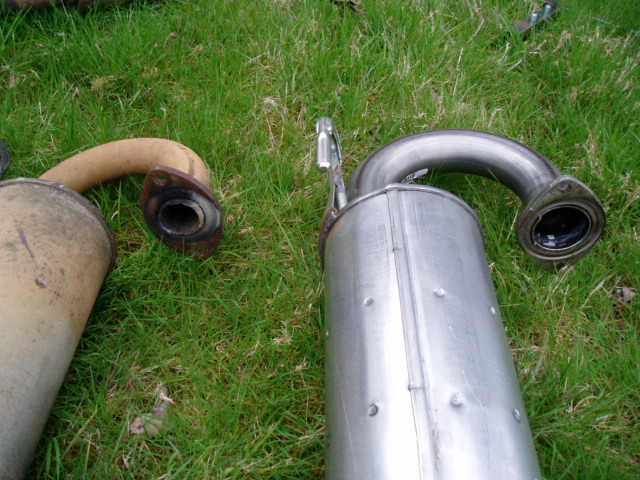 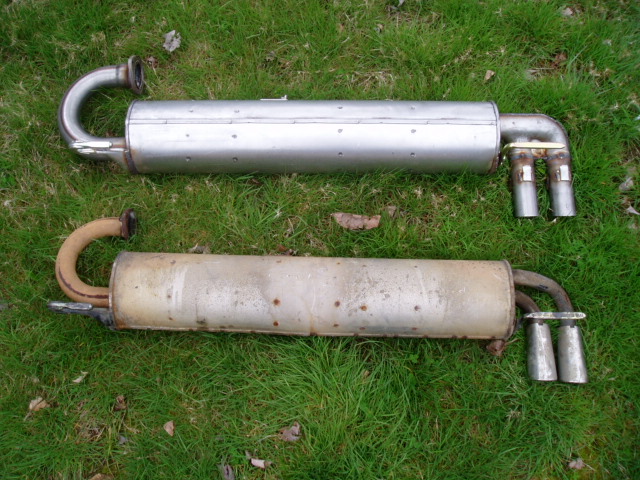 In addition to replacing the NA muffler and cat with the SC muffler and test pipe, we also removed the airbox lid for these runs to make sure the engine was getting all the air it needed.  Here is the result: 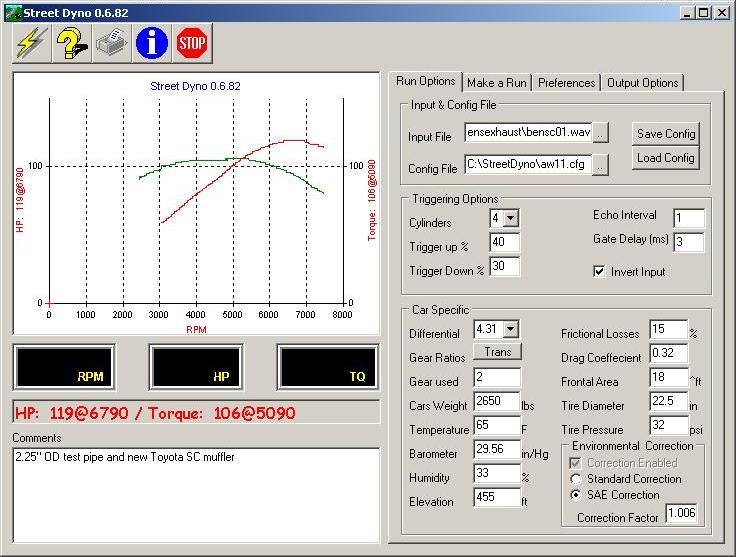 As before, these figures are only useful for comparison against the other systems we tried on the same car, but we found a gain of five horsepower at the peak and a significantly stronger torque curve from 3000 RPM on up.  More telling was the power gain between the horsepower peak and the 7500 RPM redline.

At this point there’s absolutely no doubt that the MR2 can make more power through simple improvements to the intake and exhaust systems.  This was a quick-and-dirty exercise with no effort made to optimize anything.  There may be more power hiding in that engine yet.

Finally, we threw Ben’s old system on the car to see what it was capable of.  As you can see, this was as simple as it could be – nothing more than a parts-store glasspack muffler stick-welded to the collector outlet cut from a stock downpipe: 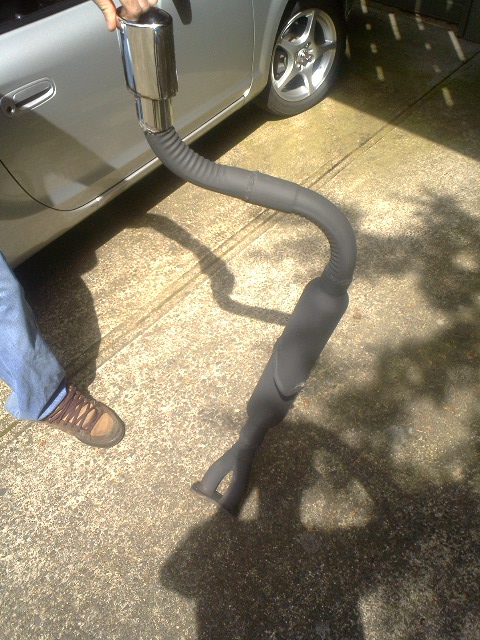 Despite its crude appearance and fairly sloppy construction, we found that the glasspack actually made the best power of all three combinations: 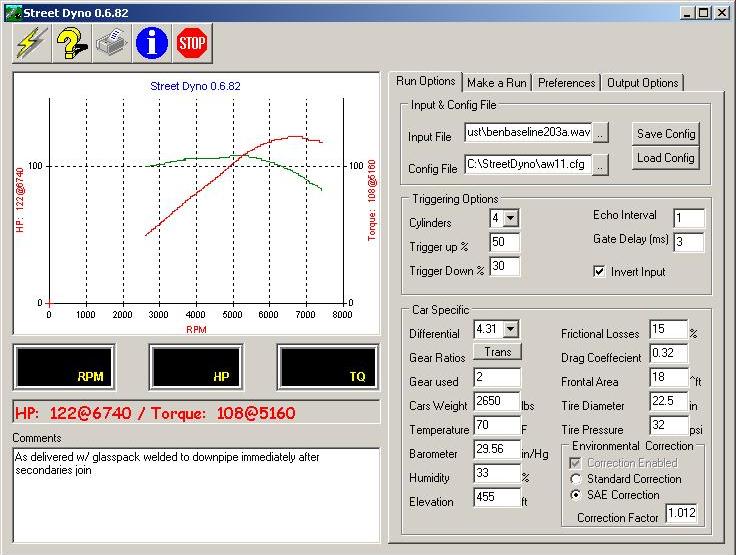 As you can see, the ugly and crude glasspack system made more power than either of the other two systems!  So what did we learn from all this?

First, it became immediately apparent that despite the naysayers, there is some power to be had by changing the exhaust system on a stock MR2.  I feel that even greater gains are possible through improvements to the intake tract and a better header and downpipe combination.  Toyota’s design is compromised in several ways and can most likely be improved upon.

Second, we found that the torque curve did not suffer one bit as horsepower went up. The better performing systems simply climbed gradually and made increasingly more power as the RPM rose; the best system made more power and torque than stock from 3000 RPM all the way through redline.  This supports the premise that decreasing backpressure after the manifold/header does not have a negative effect on torque.  Backpressure does not improve performance.

Third, despite the fact that the glasspack Ben had been using has a core that is necked down to below the tubing size and further choked off with some very large louvers, it made the highest numbers. I suspect that fact is due to its straighter path (180 degrees total trajectory change vs. at least 360 degrees in a stock style system), shorter length, and/or lack of crimped and kinky bends and internally tiny flex joint that the stock downpipe has. That stock downpipe is not a pretty piece. With the heatshield removed, the bent portion between the flex pipe and the cat really looks horrible. It’s kinky and crushed and generally not a nicely made piece.

We will have to revisit this topic at some point in the future with some more back-to-back product comparisons.  Anyone in the PNW want to loan me a stock AW11 in exchange for a little exhaust work?